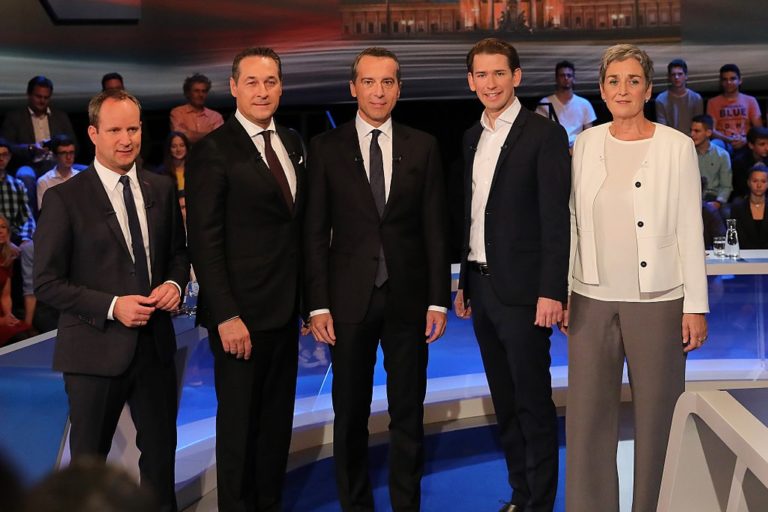 The first exit poll showed the FPÖ (Freedom Party Austria, ENF) in second place and all three small parties past the entry barrier of 4%. But the final results looked a little different. Despite a horrible campaign and all the surrounding scandals [insert link to first two articles] the SPÖ (Socialist Party Austria, S&D) managed to keep the exact same vote percentage it had in 2013, likely do to chancellor Christian Kern’s charisma. The FPÖ gained over 5% and narrowly lost to the SPÖ. Sebastian Kurz from the ÖVP (Austrian People’s Party, EPP) was the great and expected winner of the evening with an increase of 7.5% up to almost 32. NEOS (New Austria, ALDE) remained stable and received a very small boost in votes. The tragedy of the evening was the success of defiant Peter Pilz (Ticket Pilz) with 4.4% and the defeat of the Greens (Green Alternative, Greens/EFA) with only 3.8% of the vote, kicking them out of parliament for the first time in history. For the Greens now begins a process of grievance, processing and reinvention, as they prepare to relaunch themselves. But first, they must learn from their mistakes and pay their dues (as they lose group funding, they are now 5 million € in debt). The two heads of the party Ingrid Felipe and Ulrike Lunacek quickly responded by resigning, leaving long-time party member Werner Kogler as the interim party leader.

Ironically, only three weeks after the election, Peter Pilz resigned, due to allegations of sexual assault, dating back several years; concerning his former assistant from the Greens and an employee of the EVP. Whether his party can survive without its name-giving leader remains to be seen, but it is quite possible the Greens would have survived if these allegations had surfaced before the elections. 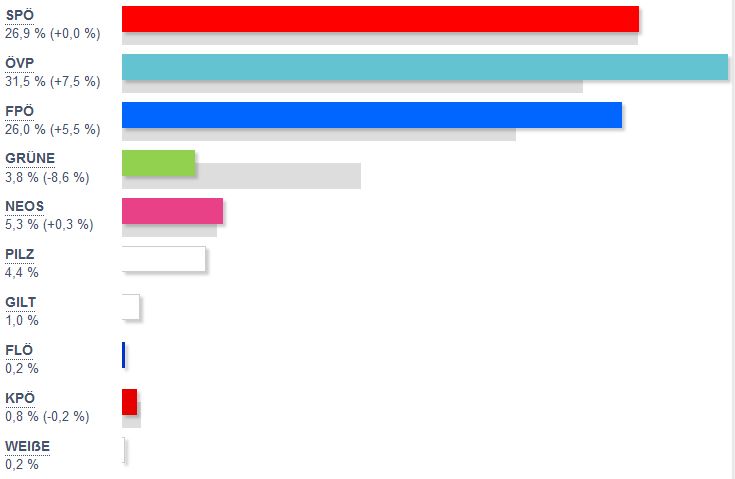 Because of the Greens’ tragedy NEOS received another mandate, increasing the total number to ten, up from the eight they were left with after one of their MPs, who had been asked to resign after a homophobic statement, tricked the party and joined the conservatives instead.

What is interesting to note in the analysis of voter shift, is that the Greens lost some voters to Pilz (and enough to enter parliament if they had stayed together), the ÖVP and NEOS, but the majority of lost votes went to the SPÖ. The Greens campaigned on stopping the FPÖ from entering parliament and it seems that their voters tried to do just that, by voting for the stronger SPÖ. However, it should be noted that tactical voting like this almost always fails to bring about the desired results. In this case, the SPÖ has shown signs of willingness to cooperate with the FPÖ. Should the ÖVP fail to negotiate a coalition either with the FPÖ or the SPÖ, a government made up of the SPÖ and FPÖ would be the go-to alternative. Therefore, by strengthening the SPÖ to the point where a red-blue majority is possible, those voters that tried to prevent the FPÖ from entering government have all but ensured that it would.

Also of note is that according to the SORA institute, NEOS actually lost 43% of their voters from 2013, but also happened to gain a few more new voters than they lost. This could mean that the formerly independent presidential candidate Irmgard Griss brought new voters with her, which indeed seems likely, as NEOS received more votes in rural areas than before and lost votes in their two main federal states, Vorarlberg and Vienna. At the same time, analysis of voters’ reasons for choosing the party, did not list Griss as the determining factor for their decision.

With this constellation of powers, the ÖVP decided to begin coalition talks with the nationalist FPÖ, despite assurances that their government would be pro-European. While this development was not unexpected at all, a sigh of relief went through many citizens who had voted for progressive parties, after seeing the results, as the ÖVP and FPÖ do not have the majority needed to change the constitution, which was heavily predicted to happen a few days prior to the election. They can only achieve this with either votes of the SPÖ, or more likely NEOS. NEOS has some common ground with both parties, when it comes to economic policy, but also is the most pro-European party in parliament and therefore would never accept any anti-European stance from the government.

This makes it less likely for the government to pursue any policies that would anger NEOS, despite not formally being in government. Which may be to Kurz’ benefit in the end, as he is going to profit from showing himself as the man who tamed the FPÖ and pulled off economic reforms. However, it remains to be seen how many of his reform policies he will actually be able to push through, as already some of the backbenchers and affiliated organisations of the ÖVP have begun to resist and protest some of his plans.

It further remains to be seen how the rest of Europe and the world will react to this change in government and who will take on which ministry. It is likely the FPÖ will try to take on the foreign ministry to show how international they can be. Ex-presidential candidate and 3rd parliamentary president, Norbert Hofer is already rumoured to be considered for the position. At the same time, the FPÖ has made it clear that it will only go into coalition if it receives the ministry of interior affairs and it is unlikely the ÖVP will give them both. And as the European ministry is connected to the Foreign Affairs ministry, one would expect it to remain in the hands of the ÖVP. Though who would take on the role of Foreign minister is still unclear, as Kurz can’t possibly hope to be chancellor and foreign minister at the same time.

Concurrently, the SPÖ seems determined to go into opposition and keep Christian Kern as its leader, though only time will tell, whether or not he will be able to hold on to the position for very long, once the new government starts cutting down on the state-owned sector.