To understand the ÖVP (Austrian People’s Party, EPP), one has to understand Austrian history. After all, it was the ÖVP’s own Leopold Figl, who achieved the unthinkable and gave Austria back sovereignty and ended the Allies’ occupation with the famous words “Austria is free!”

After World War II, the provisional Austrian government was put together by the allies, composing of the ÖVP, SPÖ and KPÖ (the Communist Party, which left government out of protest and never re-entered Parliament since) and for decades the grand coalition was dominated by the ÖVP-SPÖ relationship. Until in 1966, the ÖVP won the overall majority of votes under Josef Klaus, for the first and last time in Austrian history. Since then, the ÖVP has been slowly and quietly losing support. In 1970, the social democrat idol Bruno Kreisky formed a minority government, backed by the FPÖ and turned the table on the ÖVP and formed the first and last SPÖ single party government in 1971. After a brief coalition with the nationalist FPÖ, Franz Vranitzky re-forged the grand coalition under SPÖ leadership in 1987. Since then, the ÖVP had been comfortable, playing the role of the reluctant coalition partner for the SPÖ, until in the year 2000, Wolfgang Schüssel (ÖVP) did the unthinkable and formed a government with the FPÖ, despite having lost the election to the SPÖ, lasting almost two full legislative periods until 2007, before being defeated once more by the SPÖ.

Having lost their new hero Schüssel, the ÖVP went into an internal crisis. On average, each new party leader lasted about 2.5 years, before being forced to resign under the pressures of the different branches of his party and its affiliated organisations.

Because of the long partnership between the SPÖ and ÖVP, corporatism in Austria had grown immensely strong, so far even that the two parties penetrated all of society, all the way down to children’s schools, which were either controlled by one or the other party. This system gave the ÖVP great power (and money), but made it rigid, inflexible and unable to innovate or even to allow new potential talent to rise through the ranks, leaving it in a never ending downward-spiral. 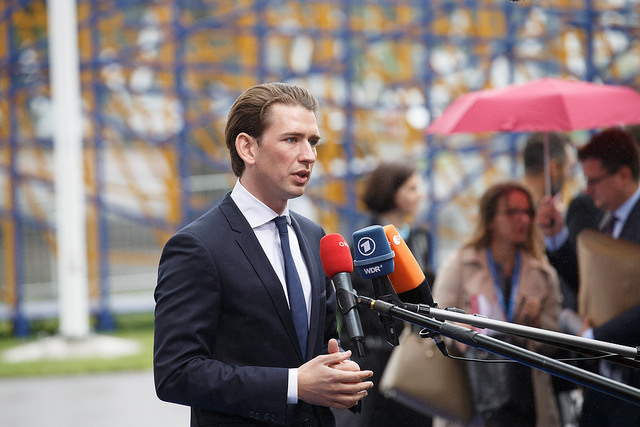 Sebastian Kurz joined the JVP, the ÖVP’s youth party in 2003 and quickly and quietly rose to its presidency by 2008. During the Viennese elections in 2010, he ran the youth campaign of the ÖVP and first made headlines with arguably dumb campaign slogans like “Black makes you horny!” (“Schwarz macht geil!”). However, his youthful charms seemed to work and he was elected into the Viennese town hall. The ÖVP’s leadership recognised his potential and tried to show off the ÖVP as young and modern, by quickly promoting Kurz to state secretary for integration; a position created specifically for him. After the national elections in 2013, then leader Michael Spindelegger broke the tradition of uniting the office of vice-chancellor and minister of foreign minister and became finance minister, leaving Sebastian Kurz (who had gained the majority of preference votes in the elections) to become minister of Europe, foreign affairs and integration.

The media had been critical of Kurz since he appeared on the political stage, proclaiming him too young and inexperienced (he has not even finished his first university degree to this day; Peter Pilz (Liste Pilz) berated him for this recently by stating “I studied economics, you only studied ÖVP.”) and he has personally admitted to having been traumatised by the experience. However, it also taught him much about the media. What Kurz lacks in policy (or any other) experience, he more than makes up for in media showmanship. No one but Sebastian Kurz would ever have flown to Damascus, simply to take a picture with a stray puppy dog in a war zone, which of course made the front page of the Austrian boulevard papers.
Before long, everyone was asking (even publicly), when Kurz would finally take over the struggling ÖVP and make it great again.

Over time, Kurz grew to become such a good speaker, he could sell anything to his voters; or nothing. On May 10th, 2017 Reinhold Mitterlehner had enough and proclaimed at a press conference that he was going to make his statement short (“Kurz”) and explained he wasn’t going to keep the seat warm until “someone” was ready to take over. He resigned as party leader, finance minister and vice-chancellor and left the ÖVP to decide its own fate. Sebastian Kurz was taken aback by this step, but quickly recovered and proceeded to impose his will and conditions onto the party, which accepted them all unconditionally, hoping for a big electoral success. Kurz also made quick work of the coalition, refused the role of vice-chancellor and called for new elections.

The ÖVP bent over backwards for Kurz and even gave up its traditional colour black and its name. The new “Liste Kurz – Die Neue Volkspartei” (The Kurz Ticket – The New People’s Party) was turquois and saw itself as a people’s movement, much like the party NEOS, which started branding itself as a movement, rather than a party, in late 2012.

Instead of presenting a new party programme with original ideas, Kurz gathered many prominent faces from Austrian society, to fill the first few spots on his new electoral ticket, giving all others to the same old ÖVP members and allowing regular citizens to take lower unelectable positions, donate money and send in some policy ideas for the movement. Meanwhile, Kurz continued to move further to the right with his personal stance on immigration and the refugee crisis. His tone towards Europe was also quite ambiguous and at times quite negative and even nationalist, attracting many former FPÖ voters to his cause.

He also raised enormous amounts of money, both from regular citizens and through immense contributions from big industrials and real estate moguls. In total, the ÖVP spent about ten times the amount of small parties like NEOS or the Greens and may even be liable to pay a fine to the state for breaking the spending limit.

Throughout the campaign, Kurz was always first and comfortably ahead of all his rivals in the polls, but always pretended polls did not matter to him at all.

Kurz spent the majority of the campaign talking about his achievements in government, blaming the SPÖ for all of the government’s failings and throwing out empty platitudes. To his credit, Kurz stayed true to his “new style” of politics, never openly attacking or undermining any of his opponents and even complimenting them on their positive achievements and ideas from time to time. The ÖVP finally presented a party programme in September, a month before the elections, a trick they might have learned from French President Emmanuel Macron.