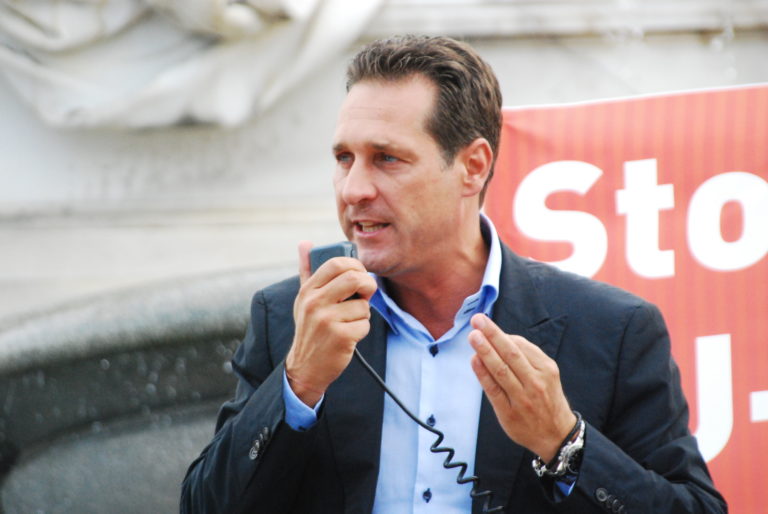 The FPÖ (Freedom Party Austria, ENF) has a curious past. It emerged from the VdU, an association of ex-nazis, german-nationalists and other groupings that could not identify themselves with the SPÖ, ÖVP or KPÖ (or in the case of Nazis, were not allowed to vote in 1945), forming what they called a “third faction” (Drittes Lager). In 1955 the FPÖ was finally founded out of this and led by the former SS brigade leader Anton Reinthaller, who had previously been incarcerated for his crimes against humanity.

For the longest time, the FPÖ was not particularly successful, but was attractive to the SPÖ and ÖVP alike, as a potential junior coalition partner if the opportunity were to present itself.

In 1986 the FPÖ was taken over by Jörg Haider, who to this day is revered by many Austrians as a second coming of the Führer. In 1983 Haider presented a new party line that was more extreme than before and with it a popular petition entitled “Austria first”, containing twelve central policies not unlike those of U.S. President Donald Trump (that’s right, Austria invented Trumpism in the 80s). This caused an outrage among the few liberals left in the party and led five MPs to leave and form their own new party, LIF (The Liberal Forum).

Despite this split and many other scandals, Haider led the FPÖ to great electoral success and into government with the ÖVP under Wolfgang Schüssel in 1999. Haider, however, never took on a government position. Those all fell to the moderate wing of the FPÖ, while the more extreme nationalists remained in parliament. The new government sent waves of upheaval through Europe’s political landscape and prompted 14 European countries to sanction Austria.

Eventually, the internal conflicts of the party became so strong that three members of government and parliament resigned, causing new elections in 2002. At those elections, the ÖVP gained 42.3% of the vote, but the FPÖ only managed to gain around 10%, reducing them to a relatively minor player in government. At the 2004 EP elections, they then fell from 23.4 % to 6.3 % of the vote. Having been involved in numerous large scale financial and corruption scandals that still trouble the republic to this very day, in 2005 Jörg Haider and several other high-level party figures left the FPÖ and founded the BZÖ (Alliance Future Austria). After Haider’s accident and death, the BZÖ failed to achieve re-entry into parliament in 2013 and drifted into obscurity.

But the FPÖ was renewed under Heinz-Christian Strache (aka. HC Strache) and led it back to the pole position in the polls.

While Haider was actively attacking Slavs and other Eastern Europeans as evil foreigners, Strache’s policy from day one was always to demonise Turks and Muslims, even going so far to release comics about the history of the evil Ottoman Empire. In one such story, a Polish inhabitant of Vienna becomes the well-integrated Christian hero, who defies the Muslim invaders during the Turkish besiegement. Ironically, while many professors at the University of Vienna were still teaching that Austria beat back the Turks on their own, Strache’s FPÖ was already admitting in their propaganda comic, that it was the Polish King who came to Austria’s aid and repelled the invaders. This illustrates a monumental shift in the FPÖ’s policies. While immigrants are still the enemy of the Austrian people, the definition of an immigrant has shifted. Under Strache, the FPÖ has also discovered the benefits of networking and cooperating with other European nationalist and populist parties, eventually leading to the formation of the ENF group in the European Parliament, bestowing upon them a great deal of EU funding.

Despite this shift in policy, the FPÖ was unable to shake their ex-nazi past, as several representatives routinely make inappropriate, racist or even historically-inaccurate statements. To date 51 members have been convicted of various crimes, including domestic violence, murder, fraud, corruption, and for being Nazis. The Greens were particularly adept at rubbing this in their faces, every chance they got, as well as pointing to their disastrous term in government. The FPÖ would always deny this and ablate all blame to the BZÖ.

HC Strache originally had a very aggressive style. Over his twelve years in parliament he matured and recently tried to position himself as a serious statesman-like protagonist, who listens to and understands the problems of the common folk, abandoned by the big parties. With the SPÖ and ÖVP barely managing a last grand coalition in 2013, victory was certain next time. In 2016, its presidential candidate, Norbert Hofer was only narrowly defeated by ex-Green Alexander Van der Bellen, further increasing the party’s confidence. But the FPÖ did not expect the SPÖ and ÖVP to produce two charming and competent candidates and Strache was forced to watch helplessly, as his position in the polls dwindled.

For the 2017 elections Strache brandished a new pair of glasses to make him seem more intellectual and presented a brand new economic policy programme, which ended up being almost the exact same as that of the ÖVP. To this day, we still wonder, which of the two parties copied which.
Apart from that, the FPÖ had to contend with the fact that they were in third place and counted out as potential victors from the start. However, this put them in a good attacking position and prepared them for a role as junior-coalition partner, whether with the SPÖ or the ÖVP. Although many officials in the party did not want a repeat of the early 2000s and preferred to stay in opposition.

Throughout the campaign, Strache bemoaned that he had first warned of all the different problems Austria was now facing and no one listened to him until now, but everyone still refused to work with him and kept stealing his ideas. But in the end, nothing would change, so long as the FPÖ was not in government. One was left to wonder if that change would necessarily be good. NEOS leader Matthias Strolz (New Austria, ALDE), who loves giving out nicknames and coining phrases said of Strache: “You are a tremendous fire detector, but I sometimes have the feeling you are also a pyromaniac and enjoy the fire a bit too much.”

The project network for the future of Europe. #ConnectEmpowerInnovate ✨🇪🇺 👇europeanfutureforum.eu/member

We are super excited to announce that Euro Babble

Sign up now for our 3rd General Assembly and join

Sending our warmest thoughts and support to the ci

Link for the registration in bio. This online eve

It’s a fine day for a Euro Babble meeting! What

So... we're finally on YouTube! Check out our very

As the pandemic restrictions are slowly being lift

The struggle against #covid19 over the past few mo